A bit of a rant today, for which I apologize in advance.

So far, I have always been quite pleased with Microsoft Connect. As a bug reporting platform for Microsoft, I am under the impression that most issues are given professional consideration, even though they might go unanswered in the long run. The Microsoft Community on the other hand—the only place to submit bug reports concerning the Windows operating system—is a joke. One can not help but feeling treated like an average chum when an underpaid overseas employee ‘answers’ your question by posting a suggestion along the lines of:

In other words, the Microsoft Community is a help desk, tailoring to problems which can be solved by pointing to documentation, or posting a friendly reminder to update your computer, rather than a bug reporting platform. Perhaps justifiably, I got angry when trying to report on a recent issue with my new XPS 15:

No, the above ‘recommendation’ is not helpful. In fact, although I am certain your intentions are well, it even comes across as offensive. Please let me clarify why, and why you (or rather, Microsoft) might want to reconsider how bug reports for the Windows operating system currently work.

As part of my workday (as a software engineer), I took time off to report on a bug which could help out further development on a product I use every day as part of my work (the Windows operating system). I know pinpointing bugs can be hard, and detailed bug reports are hard to come by. Therefore, I figured sharing my findings could help out anyone working on this product by either making them aware there is a problem, or by pinpointing where the problem in particular might lie. Consider it free labor on my behalf, because I care about the product which makes up my everyday work environment. I do the same whenever I encounter problems with Visual Studio, and every other product I rely on. To this end, I have had great experiences with Microsoft Connect; as a counterexample to the ‘Microsoft Community’ here, I feel the Visual Studio team takes feedback from the community seriously, provides timely feedback, and iteratively improves on the overall product based on community interaction.

Unfortunately, such a ‘community’ seems to be non-existent for Microsoft Windows. As if possessed with magical foresight, I was warned this “community is crap” and I should expect nothing but “crappy unhelpful ‘suggestions’ which after about a week or so are enforced as the accepted answer by moderators”. Please let this sink in for a moment: this is the impression that professionals that try to contribute to this community (and Windows) are left with after posting. Sure, they won’t report on any more bugs; do you believe this means they are solved? More likely, the product or particular feature reported on is abandoned altogether.

This is where you, Sayan, come in. An unfortunate employee of Microsoft, hired to post anything remotely related from the documentation, seemingly assuming any question on this site must be posted by a granny that just received her first tablet computer for her 75th birthday. Unfortunately this also means you are now the one being bombarded with this wall of text, for which I apologize. Feel free to redirect this to whoever ‘higher-up’ believes they are providing good ‘product support’ for Windows.

It is a bit hypocritical to pester people with pop-ups requesting automated bug reports each time a crash occurs, or requesting people to enable application reporting ‘to improve your experience’, but seemingly disregard any detailed feedback people provide voluntarily. Why is there no professional, public, bug reporting site for Windows?

For now I have disabled this “setting[ ] which adds to its beauty”, since I can obviously not expect my newly purchased >2000 dollar laptop to handle it. If you believe this means my question is answered, by all means mark it as such. Alternatively, if this bug report inspires your curiosity and you require more information in order to pinpoint the exact problem, I am more than willing to cooperate. I hope I provided you with sufficient information to run a repro on your end. I already ran two. ‘Helpful’ would be taking this bug report seriously, and you (Microsoft) doing the same.

Why does Microsoft (apparently deliberately) block off bug reports by professionals? They could easily set up Microsoft Connect to welcome Windows bug reports. Even without the developers looking into those issues directly, I feel by merely opening such a site up to the community better support than what currently is provided can be achieved. Cutting off such ‘volunteer’ testers is a big missed opportunity by Microsoft.

“What are adventure games?”, you might ask. When confronted with this question I usually reply they are interactive movies, where you need to solve puzzles in order for the plot to progress. As you interact with objects and characters within the game, the backstory is revealed. The first few minutes of Resonance provide a good first impression of what a point ‘n click adventure game has to offer: captivating cutscenes, followed by seemingly trivial interactions with the game environment, which regardless reveal a rich underlying story.

Adventure games have gone somewhat out of fashion over the years, making way for more fast-paced action-packed video games, like first-person shooters. However, a few—mainly independent—developers have kept the genre alive, and true gems (like Resonance) are still released sporadically. They generally adhere to the core game mechanics (as well as witty dialogues) introduced by the classics, and often still prefer old school pixel artwork over modern graphics.

One overlooked feature of adventure games is they are inherently suitable to be played by multiple players; not true multiplayer, but for the lack of a better word, lets call them potential ‘audience games’. At countless occasions I have invited friends over to kick back in the couch, open a beer, and gaze at a projection or screen as somebody point ‘n clicks his way through the game’s narrative. Similar to watching a movie, but different in that shouting throughout (to point out what to click next) is not only appreciated, but in fact encouraged. 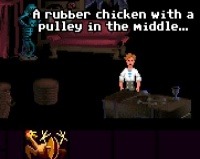 There is something suspiciously entertaining about listening to people’s concoctions on what item to combine with the “rubber chicken with a pulley in the middle” in order to finally put it to good use; usually followed by a short silence and a subsequent “Why on earth would you want to do that?”. I dubbed such evenings (and late nights) ‘Adventure Game Nights’, and wanted to report on what works and what does not. In addition, I see opportunities for making adventure games true multiplayer experiences.

After years of hosting such events for uninitiated and seasoned players alike (I once even played a game over Skype), some things became apparent:

The takeaway message for game designers and developers is there might be a broader audience for point ‘n click adventure games than they traditionally anticipate. Rather than solely tailoring adventure games to single player experiences, there is an opportunity to design adventure games with group experiences in mind. Besides changing the overall format so it can be consumed in one sitting (similar to movies), it would be worthwhile experimenting with features which account for multiple players wanting to interact with the game environment simultaneously. To this end designers could leverage the fact that players each carry a powerful computer in their pockets (smartphones) allowing for rich interactions. Some obvious candidates: maintain a history of interactions and dialogues, ‘vote to skip’, suggested puzzle resolutions including a point system, …

The possibilities are endless … A multiplayer point ‘n click game is long overdue!

Cutting right to the chase: Would it be possible to create software, entirely developed and moderated by an open community?

Call it democratic software development, or open source on steroids if you will. While discussing this the default answer I usually get is “it can’t be done”, which is why I gladly filed this post under the newly created category “Crazy Ideas”. Nevertheless, I find it a valuable exercise to discuss any nutcase ideas, in order to evaluate how far-fetched they actually are.

A person with a new idea is a crank until the idea succeeds. – Mark Twain

So what would such a system look like? What would be some of the requirements?

Motivate people to participate.
Ever heard of gamification? “Gamification is the use of game design techniques and mechanics to solve problems and engage audiences.” If you are a software developer, chances are you ended up on Stack Overflow at some point. It’s a Q&A site for programmers which is quickly becoming one of the main resources for help for professional programmers. Stack Overflow incorporates many aspects of gamification, and it’s mere existence shows the power of it. A significant amount of developers is prepared to share and learn in this fun environment. Quality content is pushed to the top via a voting system, while erroneous posts are addressed by the community.

Divide work in small enough tasks.
The key to dividing work across many people is to divide it in such a way that any person only has to implement one small aspect of it at a time. Traditional software development where somebody develops a feature from a to z won’t work. One programming paradigm which at first sight seems extremely suitable for this is functional programming. A person could implement functions, and define new functions on which he relies. Combining this with aspects from test driven development where the caller has to comment and write tests for the desired function would result in automated testing.

Without worrying about the specifics too much (it’s just a nutcase idea after all) consider what the possibilities would be. In Luis von Ahn’s great TED talk the CAPTCHA inventor discusses how he re-purposed CAPTCHA in order to digitize books. Around 2,5 million books a year can be digitized through this massive-scale collaborative effort. Their next project indicates this doesn’t have to be limited to really mundane tasks. They are now working on translating the web!

Moderation guided by conventions.
Conventions are important in a group effort. Unfortunately, when discussing programming conventions people most often discuss naming and formatting conventions, while there are plenty of other important conventions to agree on. This will most likely be the topic of one of my future posts. Conventions should be as unambiguous as possible in order to know where to expect a certain piece of code, or where to place it. Conventions like these could be agreed upon through a democratic process, which seems to be working pretty well for Stack Overflow through its meta site. This allows for community moderation following the guidelines established by the community.

Couple all the separate work together into one entity.
Going from a set of loosely coupled functions to a working library would result in plenty of extra challenges, but also opportunities. Since nobody wants an all encompassing library just to use part of its functionality, the system should allow you to extract just the functionality you are interested in.

Well, … I went a bit further and attempted to start a small proof of concept. I figured the Stack Exchange platform on which Stack Overflow runs already encompasses much of the desired functionality, and creating a small scale library on it would be possible.  The idea was to create an extension method library for C#, which exists primarily out of a set of functions. Requesting new Stack Exchange sites is possible through Area 51. Not unexpectedly, my idea got shot down since it doesn’t fit the intended Q&A format. Oh well, … one can only try.

At the UIST 2014 conference, Thomas D. LaToza presented “Microtask Programming: Building Software with a Crowd”, a system encompassing many of these ideas and actually evaluating them, resulting in usable code. The paper is available on ACM.