Over a year ago I announced Socratrees, a platform to support online argumentative discussion.

Complex interrelations between different statements which make up an argument are often hard to follow, or hard to contribute to, when forced into a linear format. This is an unfortunate characteristic of essentially all modern media used to present arguments and host discussions. Socratrees offers an alternative by outlining arguments into intuitive hierarchies of supporting and opposing statements. 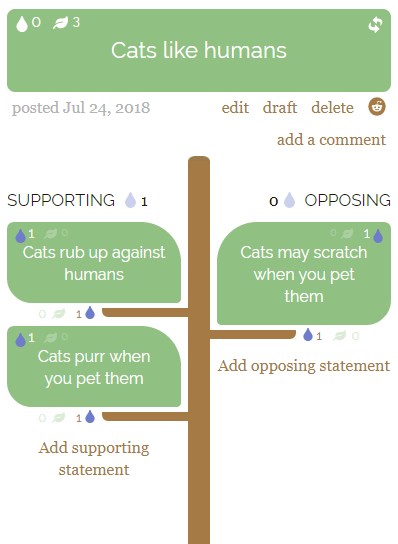 Our mission statement reads as follows:

Since the start of this month, the site is now in private beta during which we will evaluate how well our current design supports these goals and how it can be approved upon. This contributes to research on argument technologies. Join private beta and help us make discussions great again!

I have a PhD in Human-Computer Interaction and am currently working both as a software engineer at iMotions and as a postdoc at the Technical University of Denmark (DTU). This blend of research and development is the type of work which motivates and excites me the most. Currently, I am working on a distributed platform which enables researchers to conduct biometric research 'in the wild' (outside of the lab environment). I have almost 10 years of professional software development experience. Prior to academia, I worked for several years as a professional full-stack software developer at a game development company in Belgium: AIM Productions. I liked the work and colleagues at the company too much to give up entirely for further studies, so I decided to combine the two. In 2009 I started studying for my master in Game and Media Technology at the University of Utrecht in the Netherlands, from which I graduated in 2012. View all posts by Steven Jeuris